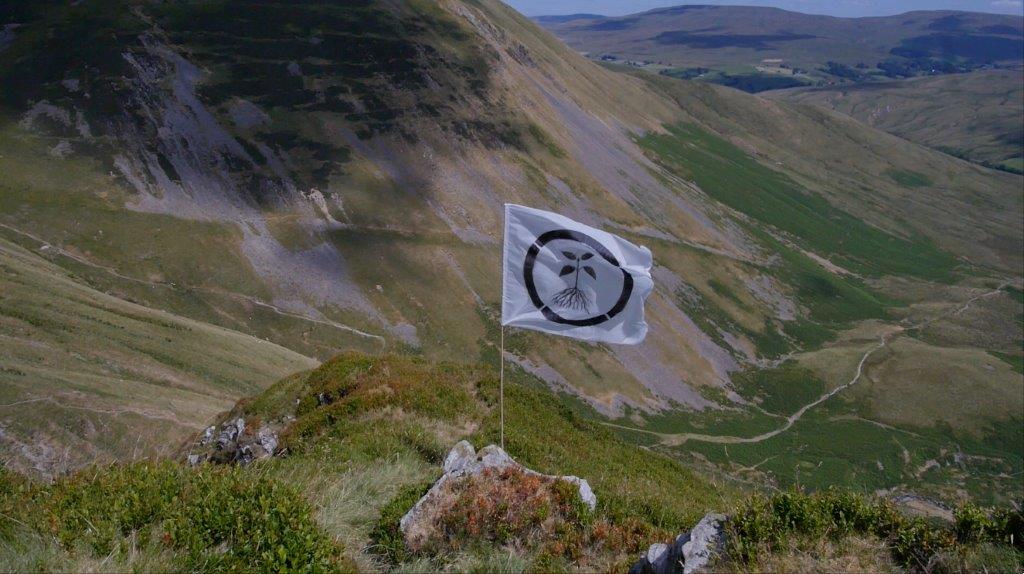 The Common Line runs across the lower section of Cautley Spout, Britain’s highest waterfall, which cascades off the fells near the M6 south of Carlisle. The very midpoint of the line is only about 20minutes walk from the spout. We go there to  test out the ‘planting’ of a virtual tree, and to stake out the course of the line with a number of white flags – at the midpoint of the line and by the spout. The spout is visible from a distance, towering spectacularly in front of us as we approach. The rather minimalist landscape surrounding it creates additional focus on the feature. There are rocks, gravel, grass and sheep, with bracken growing along the bottom of the valley and the occasional shrub protruding from the crevices along the stream.  Higher up on the slopes, the peat layer has ruptured in places, miniature landslides expose the gravel underneath. ‘Sheep-wrecked’, remarks one of our companions on the day, quoting George Monbiot.

The aesthetics of landscape are a major contributing factor when it comes to policy making, and the politics of conservation are largely aesthetically motivated. Landscape can go out of fashion, which can be as irrational a process as holding on to the status quo. In after-war Germany, countless streams, rivers and landscapes were engineered at scale, a process that went well into the 70s. The vigorous economic ‘pragmatism’ behind this has been interpreted as a reaction to the spiritual destruction and subsequent vacuum that a failed ideology had left behind – leading to a wholesale uprooting of ancestral connections and cultural narratives. From this angle, the radical re-modelling of the ‘Kaiserstuhl’, a landscape of ancient vineyards flanking the mythological Rhine valley, appears almost as an act of desecration. Damage was done from an environmental, cultural heritage and aesthetic perspective, whilst radical economic considerations prevailed.

The relationships between people and land are complex, culture and context specific. Working alongside the NPA on Dartmoor some years ago, I became interested in how regional visitors to the moor value the experience of its wide open spaces in relation to the tightly packed urban environments they come from, but also in relation to a Devon countryside that is interrupted by fencing, hedgerows and traffic. Accessible views are sought-after and often commodified attractions, parking fees and ice cream van included. The uplands by contrast, offer perspectives, freedom of movement, and a sense of space and rugged, awe-inspiring wild-ness that is occasionally referred to as the sublime. Whilst I like a rugged landscape myself, up on Dartmoor I began to suspect that from a phenomenological point of view, the landscape’s perceived vastness is largely down to the absence of visual reference points. A 10foot drop may appear ten times its size at a distance – a welcome hallucination for those escapists who seek the impression of scale. In the context of the above it is easy to see why people treasure the experience.

Up on Cautley Spout, two men in their 60s appear, both think the line is an ‘absolutely brilliant’ idea and something they want to take part in. Soon they are followed by a couple of similar age. The man offers a clear perspective: ‘trees don’t belong up here’ and further to that, ‘a line of trees is not natural’. I avoid a discussion about the nature of nature and suggest that the sheep-farmed hilltops might not be considered natural either, which in his eyes renders me ‘a follower of Mr. Monbiot’. His partner explains that ‘abroad, where they cover the hills with trees, you don’t get any views’, a possible implication being that hills with trees on them are quintessentially un-British, as is the absence of views. There is however a case to be made that a view exists through its framing, which implies an interplay of absence and presence. This is epitomized in the dramaturgy of the English garden which creates rhythms of revelation and disguise, of the near and the distant, all of it through carefully and economically framed vistas.

Finally the man suggests that above all ‘we need to get rid of people’, which does not seem a rational argument in the context of our conversation. It also gives our exchange a rather personal twist, given that I sport a slight German accent, but it illustrates the depth and complexity of sentiments attached to land. Within two successive encounters, we had two passionate responses to our proposition that couldn’t have been any more different.