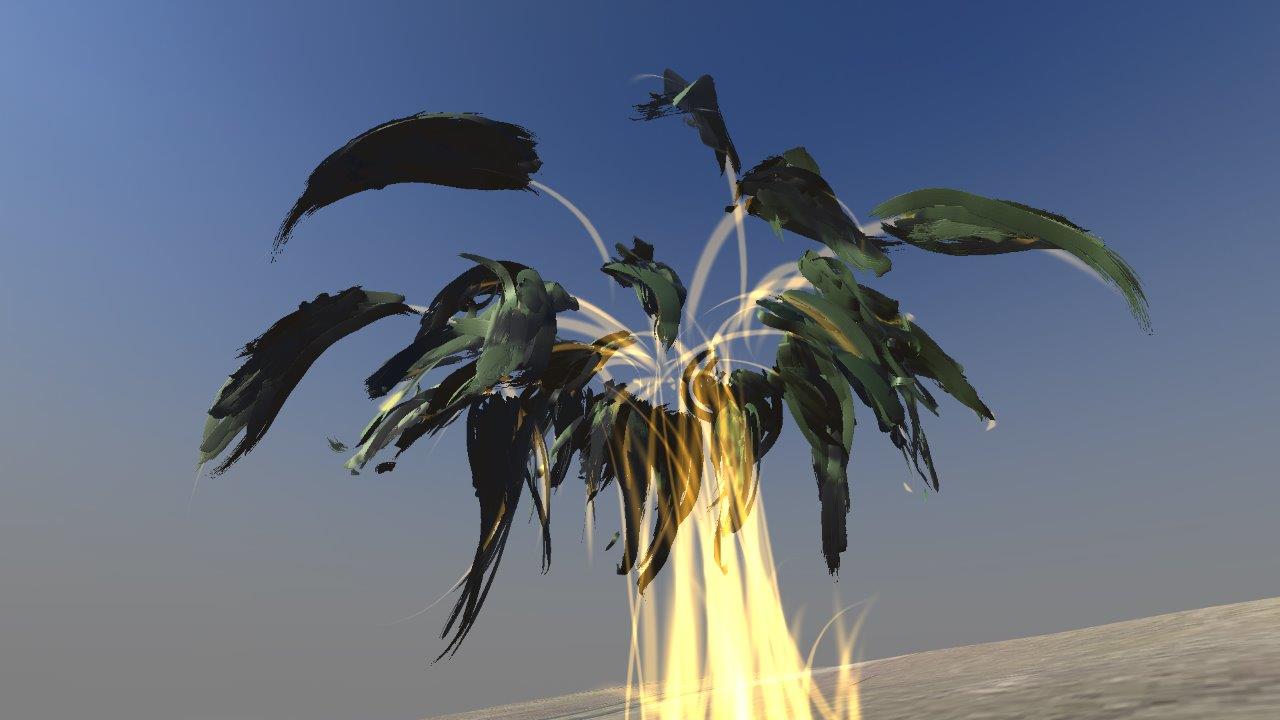 Tilt Brush is a digital apparatus for the drawing of 3D objects in VR. The user puts on a VR headset and uses hand-held devices to trace their movement within a mapped 3 dimensional VR space. Tilt brush requires a PC with significant processing power, high-end headset, sensors and a safe space to set up and operate, consequently the technology is still a rarified experience. Tilt Brush promises the artist to ‘experience painting as you have never done before’.

I tested the tool from the perspective of a professional artist to compare it with traditional approaches and to assess its potential to create ‘hand-drawn’ VR trees for the Common Line as part of public participation processes. At a second stage, I invited members of the public into my studio, to play with Tilt Brush.

A revolution in painting?

Tilt Brush does not support the art of drawing or painting in a traditional sense. To name just a few differences – three dimensions are no longer translated onto flat canvas and all the associated skills of this process become obsolete, alongside their expressive potentials. The traditional painting’s capacity to act as a portal between the ‘here’ of the observer and the ‘there’ of the painting is no longer a consideration, neither is the concept of a painterly surface as an active membrane between those worlds. Live drawing is not possible and the images are developed in a feedback loop of imagination and virtual trace.

To me, using Tilt Brush felt closer to 3D modeling – without the tactile feedback. This brings its own technical challenges and it has to be said that in the traditional modeling process, tactile feedback tends to be experienced as both rewarding and key to decision-making. In Tilt Brush, we have to build the object with the same level of detail from all sides, which can result in a mechanical approach that may feel quite tedious.  What Tilt Brush lacks in terms of the above qualities, it gains from an unprecedented ease of leaving traces that magically sustain themselves – frozen midair in a parallel universe. Obviously every limitation can be turned into a gain and I am sure there is great potential for artistic exploration.

First I used Tilt Brush to record my own movement in space. To be safe, I had to take into consideration the cabling and the fact that I moved essentially blindfolded in the physical space. This awareness makes for a somewhat contained expression. Being ‘inside’ a drawing causes a loss of perspective, whilst stepping outside of a movement causes rupture. With this in mind, my focus shifted from visually directing my strokes, towards developing repeat movement accuracy in space, to create a consistent VR tree-object. With my eyes closed, I would continue until the movement cycle was finished. I found this working from body memory satisfying and contemplative. On reviewing my VR objects, I noticed that they gradually came closer to the imagination I had developend when moving. This almost involuntary adjustment process points at the development of a new skillset. The VR traces are anthropocentric in their proportionality, but their scale can be radically altered in AR.

The second approach was to build up a representational digital tree-object from all sides, with myself in opposition to the object rather than being embedded; a rather traditional relationship between artist-demiurge and art object. I got quite immersed in the task and ended up spending several 4-6h shifts in VR which is well beyond health-recommendations and some physical effects could be felt after. The results and challenges were rewarding enough to keep me going. Working to a higher degree of naturalism turned out to be a highly repetitive and time-consuming task. The relationship between canvas size and brush stroke is central to the physicality of traditional painting practice. The nature and scale of the human effort encapsulated in the canvas-object have powerful connotations, putting the artist and their process in a central position. The detailed representational drawings I did in tilt brush, a fir and an oak tree, were rather time consuming, but it is no longer possible to gauge the level physical involvement through scale in an object, that can and will be scaled arbitrarily in AR. In a sense, the artistic labour ends up being less of a narrative component, and it becomes absorbed into the service of a utilitiarian and customizable output.

Both the naturalistic and the expressively drawn tree objects proved to be very effective with test audiences most of whom were new to the technology.  A large proportion of our test audiences put their positive gut responses down the novelty value of the technology in combination with how it is conceptually embedded in the project.